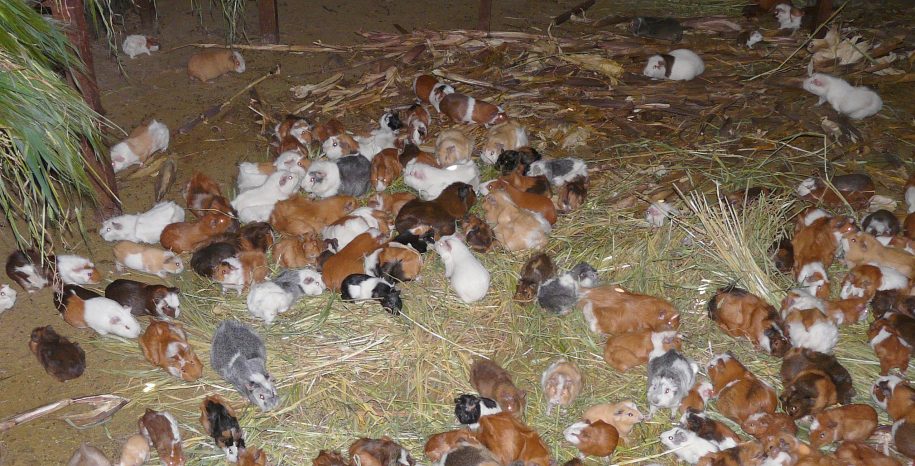 Most people who come from Western countries in North America or Europe know of the Cuy as a “Guinea Pig” and have had or known someone who has had one as a pet. In South America however, the Cuy is a delicacy which is known for its rich flavour and texture, and has been used for over 5000 years in the Andean highlands of Peru, Bolivia, and small parts of Ecuador and Colombia.

The Cuy was originally domesticated for its meat in the Andes. It was usually eaten by indigenous communities during significant ceremonial events as a delicacy and reserved for special occasions, but the Cuy has a history of much greater significance in the Andes than just food. It can often be seen in the elaborate ceramic and gold artwork of the Moche culture from 100-700 AD on the northern coast of Peru, and it can also be recognized in Folklore tales and traditions of the past. The exchange of Cuy as gifts, their use in social and religious ceremonies, and for their use in healing. Even today the Cuy is used by Curanderos, or folk doctors, to diagnose and cure diseases by moving the animal all over a person’s body, and cutting the animal open to determine the illness. This type of healing is used in many areas where Western medicine is either unavailable or untrusted.

Over the past 60 years especially, Cuy has become much more popular in cities and urban areas as people move in from the mountains and bring with them a big part of their culture, many raising their own Cuy in their urban homes. Places like Huaraz and Cusco have plenty of options available for curious tourists to dine on the Guinea Pig, and in any major Peruvian city nowadays you are likely to spot a “Don Cuy” delivery moto cruising around the streets.

One of the reasons that Cuy is so popular to raise is the fact that it is a very low-maintenance animal, needing little space, food, and attention to thrive. It breeds quickly with up to 5 litters a year and an average of three pups per litter. Many households have permanent cages set up with dozens of Cuyes who often only need fresh alfalfa to provide them with the nutrients and water they need. In addition to the simple and easy standards of raising these animals, the Cuy meat is extremely high in protein and low in fat and cholesterol, and is very nutritious.

So now, how is it eaten and prepared? Many of the most popular Cuy dishes include some kind of spicy pepper sauce, and can be fried, baked, grilled, dried, you name it.

Usually the organs are removed, but kept as they will fry them up seperately for eating, and the intestines can be cleaned and fried up to make an especially tasty and crispy snack, like eating chips.

From the personal experience of a foreigner  — The texture and flavor is similar to the chewy dark meat of chicken, and it is almost essential to eat with your hands as the small bones need to be picked through thoroughly to extract the meat. Everyone in the group will have the Cuy in their two hands, pulling it apart with their teeth and eating everything including some of the bones. The local people usually get the head as, according to them, it is the absolute best with the cheeks being the most tender part of the whole Cuy! One of the most significant parts of the whole experience is that because it takes so long to eat, it connects people through a long, social visit.

COME TRY CUY IN THE ANDES

In Peru today Guinea Pigs are so popular that about 65 million are consumed each year, they even have their own holiday on every second Friday of October. On this day all over Peru there are events like dress up competitions in Churin where people can show off their Cuy fashion, mock bullfights with Cuys, and all kinds of different Cuy dishes served. While visiting The Lazy Dog Inn in the Cordillera Blanca, you will be surrounded by a community of Cuy lovers who have used this dish for decades on special occasions such as birthdays, the completion of building a new house, and hosting special guests. If you are ever invited into a local’s home to eat Cuy, do accept as it is a special honor and a unique experience that you will not have anywhere outside of the Andes.