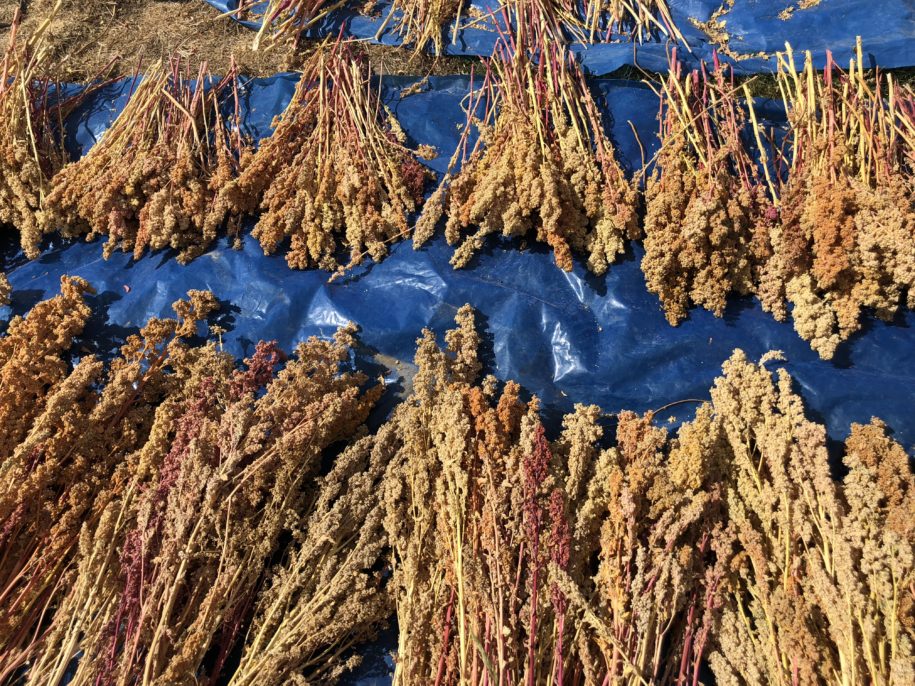 Growing Quinoa in The Cordillera Blanca, Peru is an age old tradition. Quinoa is an ancient plant from the amaranth family endemic to the highlands of the Andes and believed to be domesticated 3,000-5,000 years ago. Quinoa is grown as a grain and the seed pods are a complete protein, containing all 9 essential amino acids and was a major part of the food supply of the ancient Quechua people that lived in the highlands of the Andes for thousands of years.

Quinoa at The Lazy Dog Inn

The Lazy Dog Inn is located in between three different indigenous farming communities so it was only natural that we would begin growing our own quinoa. With the help and advice of our neighbors we produce between 50-60 kilos of quinoa grains annually, all organically grown using low-impact and organic farming techniques.

Peru has many varieties of quinoa and the heirloom variety we grow here has been cultivated in the region for centuries as its resistant to insects, frosts, and poor-quality soil. Additionally it has a delicate taste and a fluffy texture when cooked. While these characteristics make it perfect for growing at 3,670 meters (11,700 ft.) its growth cycle is 10 months which is 4 months longer than the industrially grown variety found on the coast that has a 6-month cycle.  Harvest is between July and August when the air is dry, the sun is hot and winds are high to blow the chaff away.

The process of harvesting and cleaning quinoa is time and labor intensive in the Andes. It is not done by machine but by hand with traditional methods. When ripened and ready to harvest, the quinoa seed pods turn a glowing color of deep red and almost purple. The stalks start to turn a golden wheat color and slowly start to bend under the weight of the ripened grain. The locals use a small curved knife called an Os, which they use to cut-off about half a meter from the seed cluster down the stalk. The quinoa is then set under the Andean sun to dry for 3 days to ensure it’s very dry.

Once the quinoa stalks are dried, the seed pods are rolled with medium pressure on a large flat stone that’s placed on top of a blanket. The blanket catches all the seeds that are removed from the husk with the friction of the stone.  The end product leaves a pile of both the seeds and husks. To separate the seeds from the husks the seeds are tossed into the air with the blanket, and the wind created by that force blows the husks away, separating the edible seed from the inedible husk.

Quinoa has a built-in protector called saponin which naturally protects itself against pests but leaves a bitter and soapy taste when eaten and can cause mild stomach irritation if not removed. After the seed and husk have been separated, we wash the quinoa very well to remove both the saponin and small rocks. The quinoa is washed in a large container of fresh, clear water. As the seed and water is agitated it leaves a thick soapy residue in the water. The water is then poured off and more clear water is added. The process continues until the water runs perfectly clear.

After washing thoroughly the seed is left out to dry in a protected area so as to not get blown away by the Andean cross-winds. It takes several days for the quinoa to completely dry after it’s washed so we can then use it for consumption. Once the quinoa is dry, we store it in closed containers and which can be kept up to 2-3 years. If dried and sealed the life can be 4-5 years.

Several decades ago grandparents and their predecessors saved and used the run-off of the soapy liquid created from washing the quinoa for washing clothes, blankets and animal covers. The runoff can also be used as an antiseptic for mild skin infections. While we don’t do this here at The Lazy Dog Inn, we certainly hope you will come and enjoy some of our quinoa grown on-site or even help with the harvest. Come experience the Andes from the inside at The Lazy Dog Inn.