WE LOVE IT HERE, YOU WILL TOO!

MEET DIANA, WAYNE AND THE TEAM 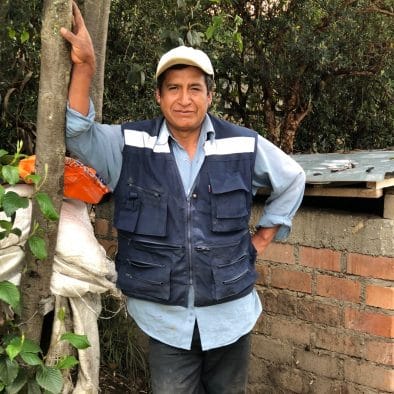 Born in Rivas, a neighboring community to the Southeast of the lodge, there's nothing this guy can't do. From greenhouses, to dry-compost toilets, to gardening, electrical engineering, tending the horses, building, there is nothing he can’t do or won’t attempt. Diburcio helps Donato ensure all areas of the grounds are running smoothly so each guest can have their best stay. When Diburcio isn’t working you will find him in his fields, tending his animals, or spending time with his wife and two daughters. Diburcio’s personal goal is that each guest feels supported during their stay, whether it’s being assisted with their luggage, starting fires in private fireplaces, or general maintenance in their rooms. 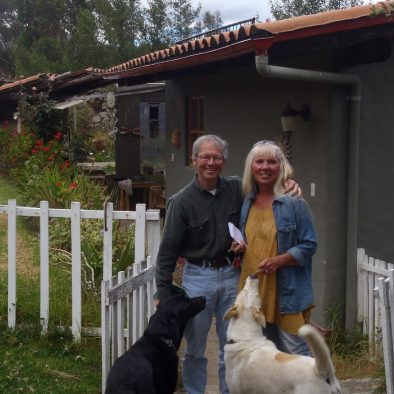 With Wayne from a family of Irish immigrants and Diana being a first generation Canadian from Holland, homesteading in foreign lands runs in their blood. Through a balance of science, philanthropy, and a lifetime of experiences the two have created a community-based environment, that takes you back to the time when playing outside from sunrise to sunset was encouraged and you could always count on your neighbor for support. Wayne first came to the area in 1988, when during the height of terrorism, he worked with a Canadian funded aid program which helped reintegrate the indigenous communities in the newly formed Huascaran National Park plan, Peru’s first national park. After completing his work in the Huaraz area, Wayne returned to Calgary, Canada, where he met Diana, a kindred adventurer, and fell in love. A few years later they started out on a 2-year plan to work and explore around Colombia and Ecuador, which turned into over two decades and landed them back in the Huaraz area. In 2003, while living in Ecuador, they returned to Peru to visit longtime friends in Huaraz, and heard about a piece of land near the border of Huascaran National Park. Upon sight of the property, Wayne’s love for the area was rekindled and for Diana (a long-distance runner) this place was a paradise of endless road, trails, and mountains to explore. A few years later The Lazy Dog Inn was open and their family-based, grassroots, NGO, Andean Alliance was started. The Andean Alliance helps promote micro businesses, health and education initiatives and continues to be the largest employer in the area. When Wayne and Diana aren’t greeting guests, you will find them running through the mountains, walking one of the on-site “lazy dogs”, riding horses, or working on a community initiative. 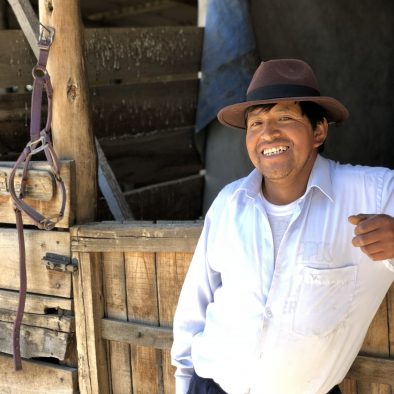 From a young age Donato always had a deep connection with large animals. This connection grew while pasturing his family’s animals and with impromptu, bareback, donkey races with his peers. With warm eyes and a constant smile, it’s easy to see how he forages his trust with large animals. This bond led Donato to become a certified Arierro (donkey handler) and cook for trekking expeditions. For the past decade we have been fortunate to benefit from his expertise derived from this connection with animals as our main “Caballero” or “Cowboy. An accomplished carpenter and welder, he defines the term “Jack-of-All-Trades”. Donato’s two youngest children attended the Early Education program at the Yurac Yacu Early Education Center, an education initiative fueled by The Lazy Dog Inn’s affiliated NGO, Andean Alliance. When Donato isn’t working at the Inn you will find him tending his own animals, caring for his fields where” he grows: potatoes, quinoa, wheat, caring for his own on-site greenhouse, and spending time with his wife, five children and grandchild. 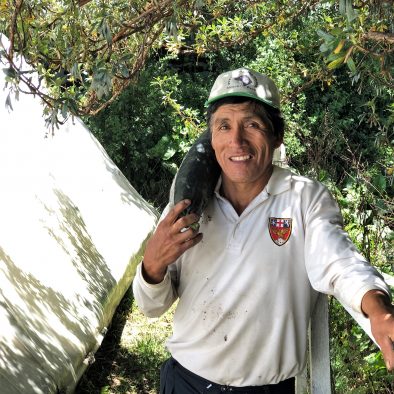 With a joke always on the tongue and a mischievous glimmer in his eye, Tito has been with us since the beginning. He started by helping build the main house, mixing the clay harvested from the pastures with sand, to create the perfect adobe brick. Almost 2 decades later Tito is here with us today and continues to work hard as our master gardener, in-house carpenter, and assisting Donato with the horses. Tito is always quick to help our guests out with any luggage or questions they may have. Born in the neighboring community of Yarush, he now lives next door to The Lazy Dog Inn in the community of Tuquipayoc. When not working at the Inn you will find Tito pasturing his own animals, working in his fields to grow potatoes, quinoa, and corn, maintaining his greenhouse, and spending time with his two daughters, grandchildren and wife. 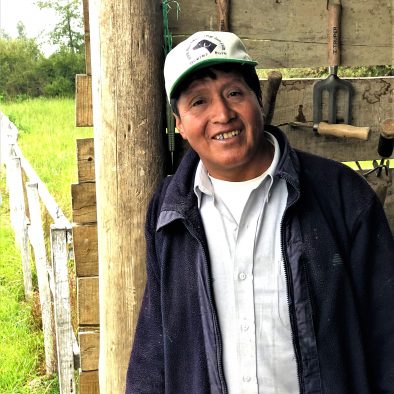 Born in the nearby town of Rivas, his quick, dry-wit, is reminiscent of a British gentleman. Hermogenes is our “go-to man” for anything to do with the gardens, greenhouses, or in-house compost systems. Our “connoisseur de caca” he is one of the leading engineers of the compost systems, keeping this very important cog of our machine running. Raising a modern family, both of his two children are attending post-secondary educations one in the local university, and the other with a local trade-school. When not working you will find him tending his animals, working in his fields, and spending time with his family. 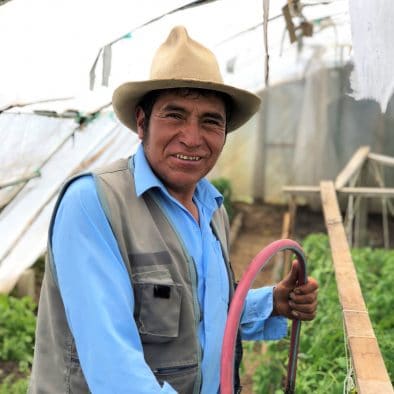 Always willing to help and armed with a smile, Alberto’s avuncular natures is reminiscent of everyone’s favorite uncle. One of the newest members of the Lazy Dog Inn but deeply entrenched in the community, Alberto was born in the Caseria of Uquia by the pre-Wari ruins of Wilcahuain and now lives just down the road in Cachipampa Alta. An expert at growing hay for the horses and tending the greenhouse we are lucky to have him bring his planting and growing expertise to the Inn. In his downtime he tends his fields in the local valleys where he grows native potatoes, quinoa, wheat, haba beans, and vegetables in his own on-site greenhouse. Alberto lives with his wife and continues to support his two children while they finish their post-secondary education. 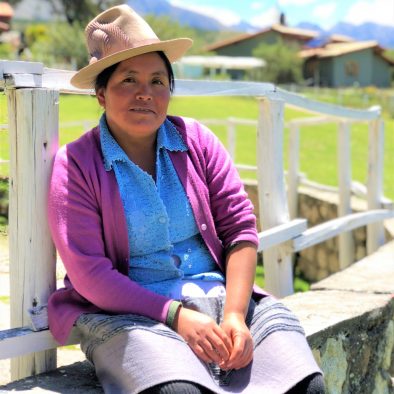 Born in the neighboring community of Tuquipayoc, Yovanna was born with a wooden spoon in her hand. Our “Chef de Sazon”, even after over a decade of whipping up tasty treats at the lodge, she is still willing to explore and expand her gastronomic horizons by fusing Andean flavors into international dishes. Yovanna brings her expertise in and outside of the lodge kitchen by offering traditional lunches for our guests in her family’s home upon requests. Coming from a family that believes in education and educating their women, Yovanna is one-year shy of an agriculture degree from the local University. Passing on her belief in education, both of her children attended the Yurac Yacu Early Education Center, part of The Lazy Dog Inn’s affiliated NGO Andean Alliance. When she’s not cooking up something tasty you will find her going above and beyond to make each guest’s stay enjoyable, with an eager smile, deep laugh, and warm eyes. Outside of work you will find her spending her time with her family and two children tending her gardens and animals. 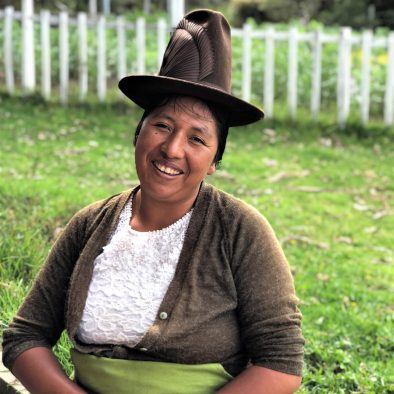 A newcomer to the team, Melania has been with The Lazy Dog Inn since September 2017, however Melania has been a vivid member of our Community Center, part of our affiliated NGO Andean Alliance, for years. Melania has worked the last three seasons at the Community Café Yura Yacu, she is a member of Women’s knitting Co-op (both programs which focus on empowering women in indigenous communities), and both of her children have attended the Early Education Center. Now working at the lodge, the transition has been organic and welcomed. In her free time Melania knits, tends her; animals, greenhouse, gardens, and spends time with her two children and husband. Melania wants our guest to know that they are welcome to come by her house where she will show them her greenhouse, garden and animals. 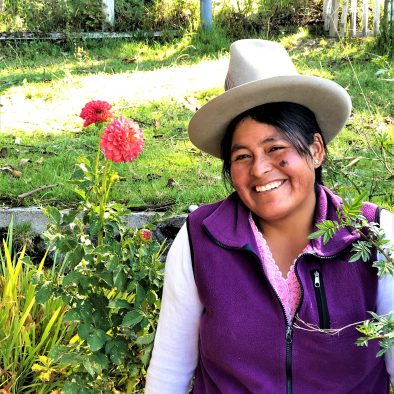 Born in Cachipampa in the Caseria of Cachipampa Alta, Nancy is one of the leaders of the community and a driving force for the Women Knitter’s Co-op at our affiliated NGO Andean Alliance. After 12 years of working at The Lazy Dog Inn, she shows each and everyone of our guests that communication transcends words and in her own way makes each guest feel welcomed and cared for. Nancy embodies what we strive for, the connection of cultures in the most positive of manners, to create an understanding that no matter where you are from or what background, we are all humans with similar needs, desires, and intentions. A fierce believer in education, both of Nancy’s children have attended the Yurac Yacu Early Education Center the Lazy Dog Inn’s affiliated NGO. Nancy wants all our guests to know that each one has an open invitation to visit Nancy at her house, where you can experience first-hand the local community and the manner which they live. Or take it another step and you can take advantage of the “home-stay” they offer. When not working at The Lazy Dog Inn you will find Nancy caring for her greenhouse, herb gardens, knitting at the community center and spending time with her two sons, father, and husband.

For questions regarding any of our programs or for reservations feel free to drop us a note.

Give Us a Call

Send Us an Email

Feel free to drop us a note at reservations@thelazydoginn.com, we look forward to hearing from you.

Our stay was amazing. Just perfect. Already planning our next trip back!
Amy Johnson
Adventurer